Sorry everyone, this post is about tampons and periods and the workplace. If you feel gross about any of those things then look away now. This post is really aimed at any Alice Bartletts out there who are waiting for someone to give them permission to fix their own workplace (as I was, until I realised people don’t just hand you boxes of tampons in this life, especially if you don’t ask).

About a month ago I put some tampons and some sanitary towels in the toilets of the office I work in. Here is what I learnt.

I am really disorganised about periods. That is clearly and obviously Too Much Information but it is useful datapoint for my motivations. Some women have their shit together in this regard. They are probably the same women that can wear white clothes without then immediately spilling whatever they are holding onto themselves.

Normally this isn’t a huge problem. In the past I’ve found places to stash tampons in the vicinity of the work toilets. At my first job I put them in the cupboard with the first aid kit. I left a note inside the box that read: “do not eat me, I am not sweets” and then I and the 5 other men at the company all had a good laugh at how gross women are for menstruating (a laugh initiated by me –they were cool guys). Nobody was bothered by their presence next to the plasters.

In my next job there was already a small box in the shared toilet which I used and replaced. I never found out who put them there but it was a cool gesture to me and any other women visitors that used the toilet that someone (almost certainly another woman) had left them there in case we needed them.

There is nowhere to leave tampons in or near the GDS toilets. My options are to always have them in my bag (reminder: I’m not that organised) or to leave them in my locker. The floor I work on at GDS is big and my locker is as far away from the toilets as it is possible to get. For the first 6 months of being at work I would have to go to my locker, take out a tampon and then try and not get distracted by anyone on my way to the toilets. I have had whole conversations with people while concealing a tampon in my hand1. Those were some awkward exchanges.

Free as in beer

I’m generally of the opinion that companies should provide tampons and sanitary towels for employees just like they provide toilet roll. Google and Facebook2 both do this, IBM doesn’t. The reason should be obvious but incase it’s not, here is a disgusting analogy: If you’ve ever not wiped your bum after a shit, you’ll know how uncomfortable that is. That discomfort is probably why companies pay for toilet paper. It would be pretty difficult to do your job while dealing with level of discomfort so toilet paper is a good investment for a company to make. Not getting a tampon when you need one is equally as distracting from your job, so it’s in your company’s interest to provide them. That said if I worked in a place that didn’t provide toilet paper, I’d be pretty used to grabbing some from my locker whenever I needed it, which is basically what women are forced to do with regard to tampons3. I’m not alone in this point of view, Jessica Valenti has written a good piece about it in the Guardian why tampons should be free, and not just at work but everywhere else too. 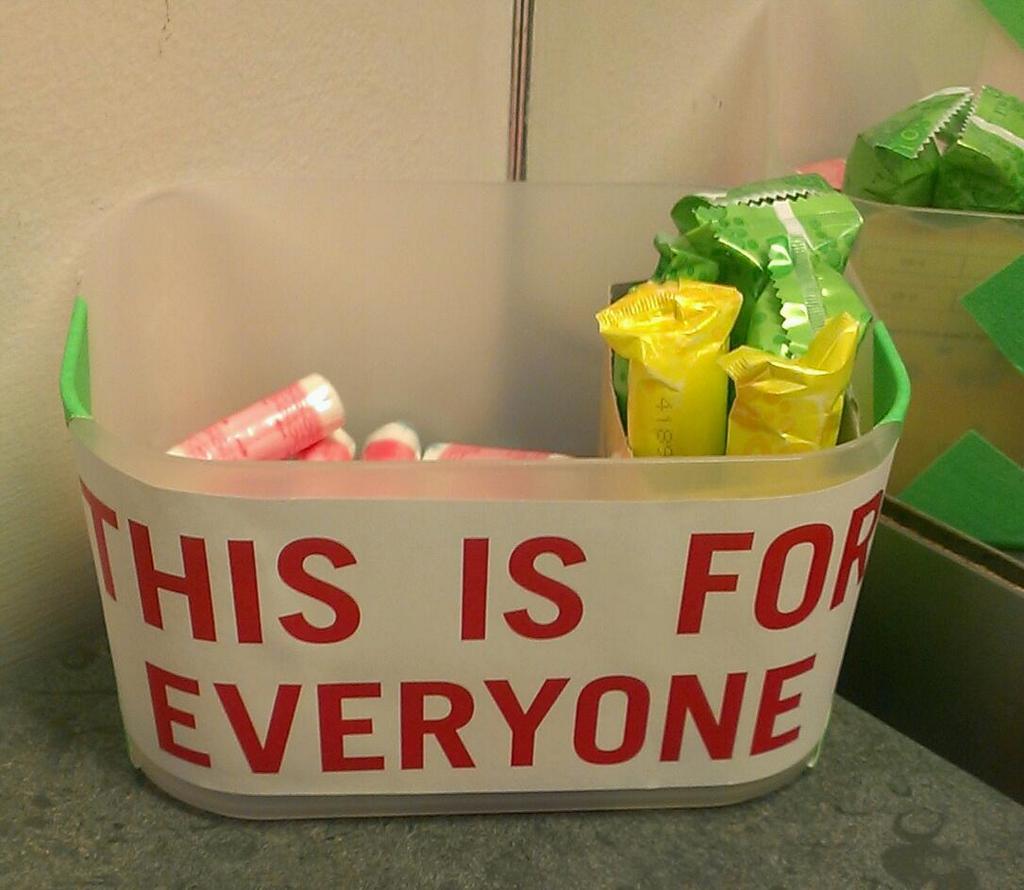 After sitting around for six months trying to work out how to get my secret stash of tampons into the toilet in a way that would stop them from being tidied away by the cleaning staff, I realised the solution. Put tampons and sanitary towels in the toilet for everyone. Put them in a posh container so it would be obvious that they were supposed to be there. Ask women to contribute if they found it useful.

I bought a container (This one from Muji), and an array of sanitary products, (towels, applicator and non-applicator tampons). I also stuck one of GDS’ design principles onto the box, sort of as a joke, but also because it seemed fitting.

What did I learn that might be handy for you if you wanted to set up your own tampon club?

I’ll probably keep doing it. £10 a month is a minor dent in the monthly amount I allow myself to spend for the purposes of stubbornness/righteous crusading/circumventing my disorganised streak4. It’s handy to know how much it actually costs to buy tampons for GDS. If, in the future, I wanted to put a case to the people who actually might pay for sanitary products out of some kind of budget, I could go in armed with some money facts. At this point I’m doing the 50% because I want to be able to get a tampon when I need one with minimum fuss, and 50% because I feel like it’s the right thing to do.