Book Review: Everything I Know about Life I Learned from PowerPoint

My review of Giles’ book was so successful that at least one colleague went out and bought it. So let’s go round again, this time with Russell’s book: Everything I Know about Life I Learned from PowerPoint. 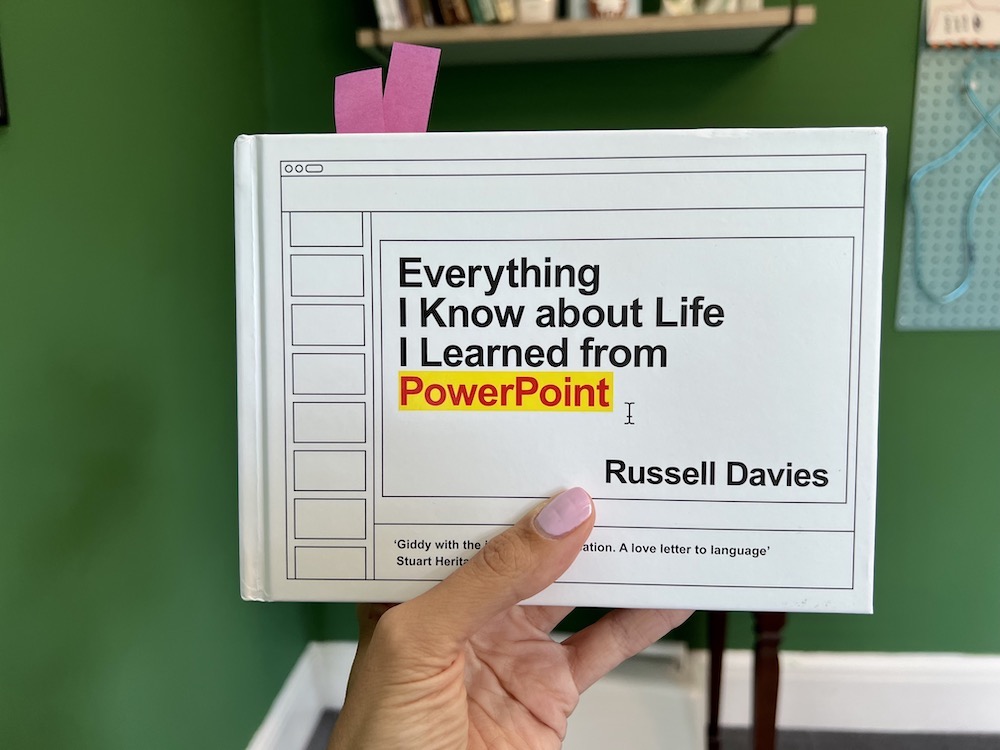 Russell Davies has taken his considerable experience of convincing people of things using slides, and distilled it into a very informative, visually interesting and funny 262 pages. He’s even made the book in the aspect ratio of 4:3, which is the first indication of the level of attention to detail which continues throughout. Russell is a friend and we share the same birthday so this is a biased review of his book from a pal and fellow piscean ♓️

The book is split into three parts - The story of how Russell came to be a PowerPoint whizz, the invention of PowerPoint & how it came to be ubiquitous, and finally a section on how to be good at PowerPoint.

Part One: PowerPoint Saved My Life

The book opens with a demonstration of Russell’s qualification to write this book, but as he says himself, it is short and full of jokes. He included some great general advice in this bit which I highlighted:

First, almost everyone can be a great presenter. You just need to talk about something you care or know about, and you need to do it to a supportive audience.

Put as much of yourself into your presentation as you can. That’s what connects. That’s why people watch. Otherwise they might as well just read your notes.

Now, you may be thinking ‘I don’t think it’s appropriate to put myself into this presentation on our OKR progress for Q3’. Well you’re wrong my love. Of course, the presentation should contain the facts you want me to understand, but I’m only going to understand them if I am paying attention, and I’m more likely to pay attention if you’re being interesting, and you can be interesting by just being you.

Russell also makes a connection between people who don’t like PowerPoint (civil servants, politicians, journalists, academics) and their strengths (giving speeches and arguing in long form writing). I think this is particularly interesting because I, uh, work with a lot of journalists…

They didn’t understand why people couldn’t just deliver a speech instead, or just write an elegantly crafted paper or article

In this part he argues that PowerPoint is a democratising tool for communication. Cool!

This section also touches upon the understated genius of PowerPoint’s inventor, Robert Gaskin:

Gaskins seems to be cut from a very different cloth [than Steve Jobs and Jeff Bezos]. He invented something pretty important. And he’s pretty proud of it. But he seems to be just as proud of the creation of http://www.concertina.com (a reference collection of documents for the study of English, Anglo and Duet concertinas)

This section covers how PowerPoint got to be so ubiquitous. It has a review of the different ‘types’ of PowerPoint that was really fascinating. The creative power that PowerPoint gives its users means it’s possible to get into all kinds of different aesthetic hijinks. 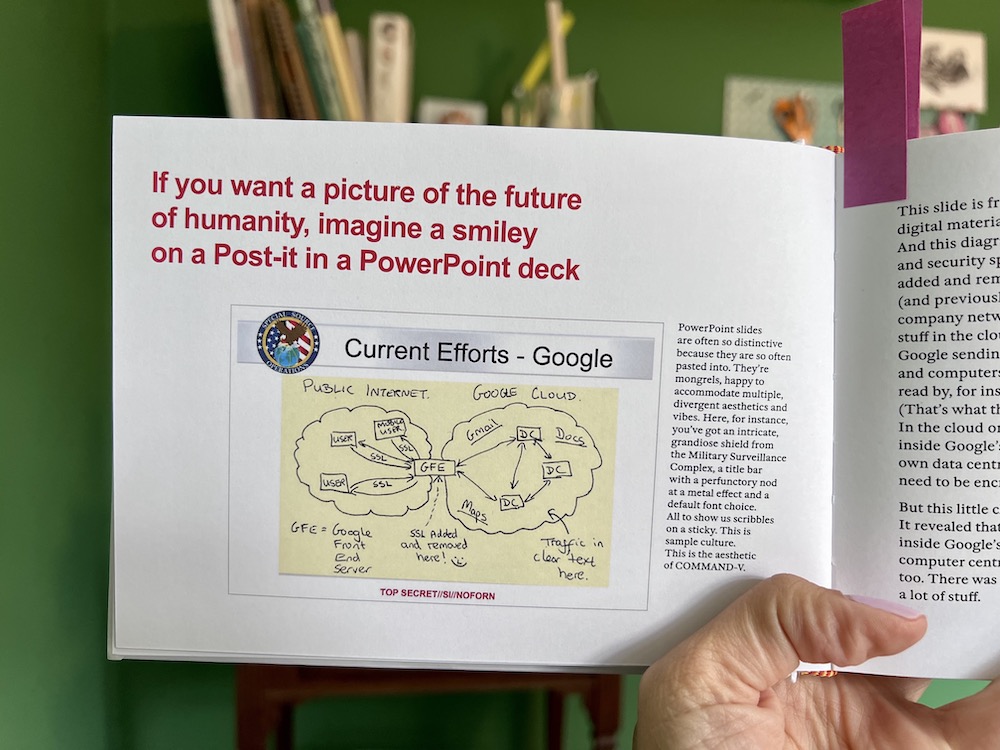 A slide from an NSA deck leaked by Edward Snowden. The slide shows how US security services had infiltrated big tech networks. At the infiltration point there is an arrow with the label ‘SSL added and removed here! :-)’ 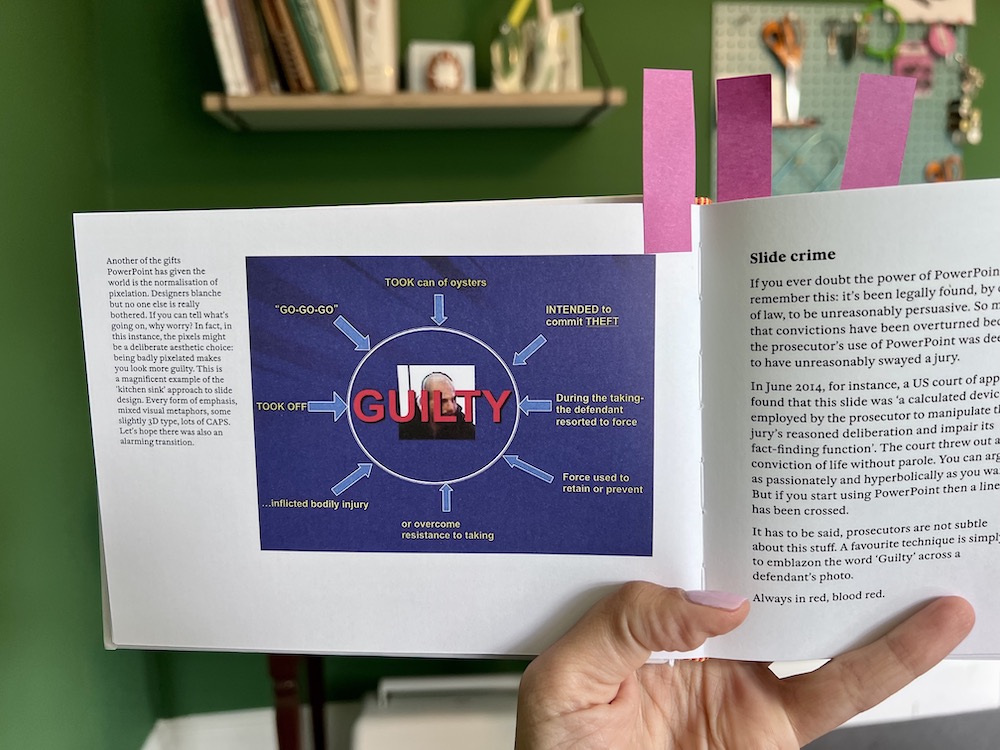 This is a slide used by the prosecution in a jury trial. The jury declared a guilty verdict that was later overturned because the slide was found to be ‘a calculated device employed by the prosecutor to manipulate the jury’s reasoned deliberation and impair their fact-finding function’.

It also includes a closer look at what Robert Gaskin did when he invented PowerPoint. Did you know that the technical team that built it was 46% women? Because Robert consciously tried to hire people from non-typical backgrounds. He did this in 1987, when the average make-up of software engineering teams at other companies was 10% women. Fuck yeah Robert Gaskin! 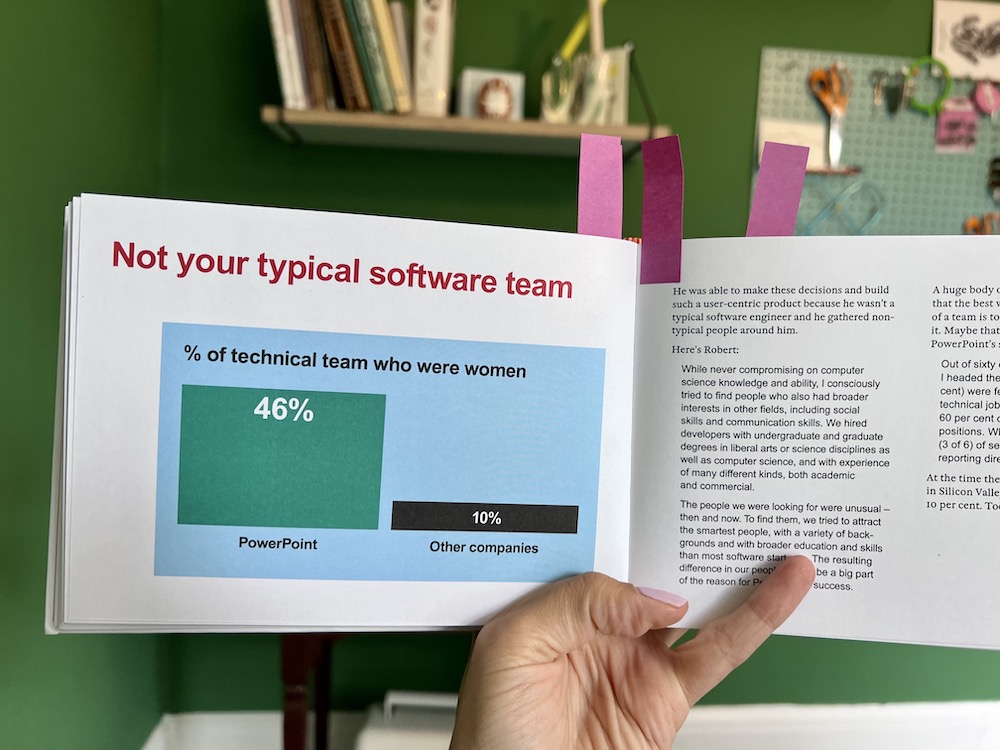 The final section gives a series of techniques to make your presentations short and effective.

I’ve tried to pull out some good bits here but it’s all good?

On the power of dividing presentations into three parts:

You’ll find that many presentations are boring because they’re just divided into two: Problem and Solution. To maintain some interest you need three bits, crisis, struggle, resolution. Three little pigs is drama. Two little pigs is an anecdote. 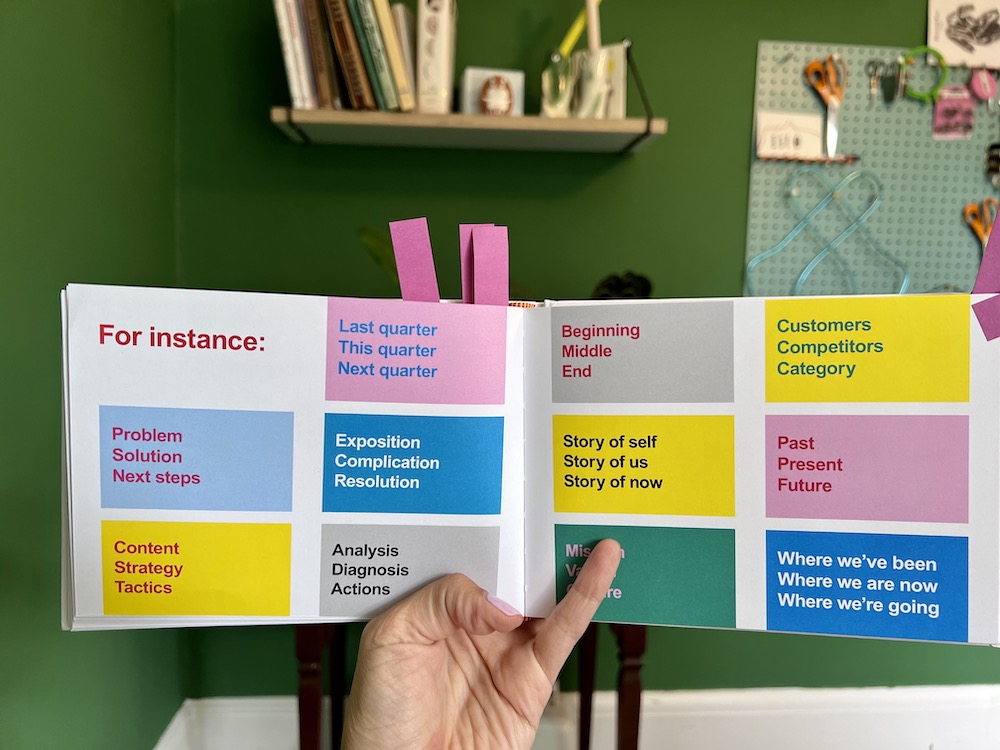 There is heaps of advice on writing clearly so people understand you, and you understand yourself. When I’m not sure about something I tend to try and hide it behind more complicated words, but when I force myself to explain something in plain non-jargon language, that’s when I realise I don’t fully understand the idea and I have to go away and do some reading. 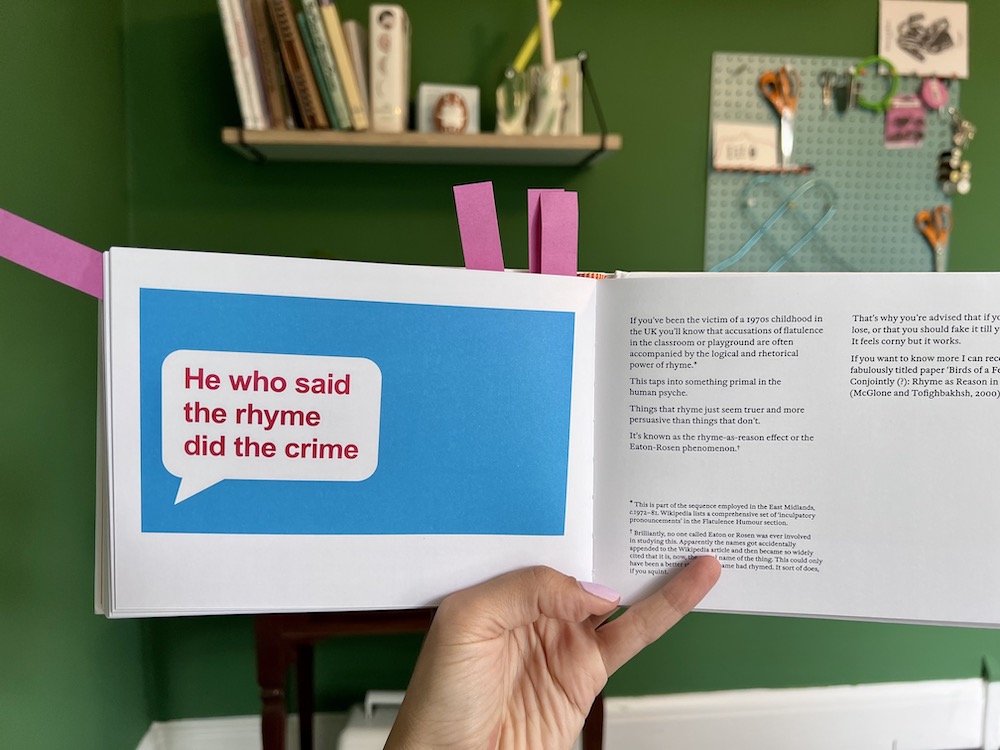 As you would expect from a writer, Russell also has great advice about making your words interesting. Just because they are clear doesn’t mean you can’t be fun with alliteration, beefy verbs, rhymes etc. 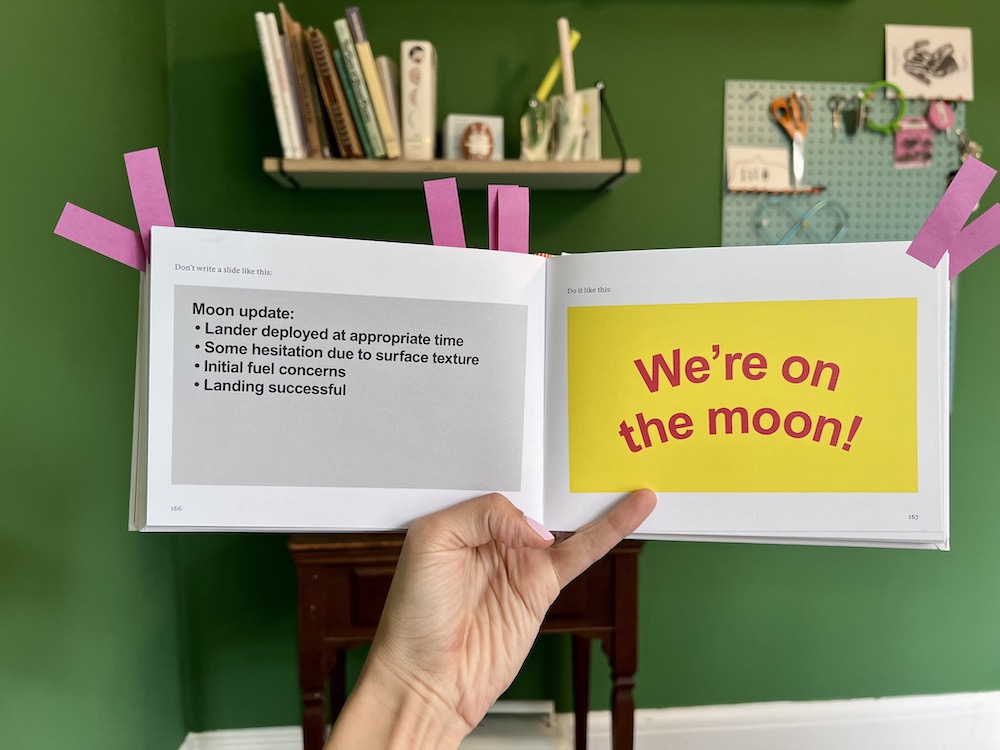 And the final part of this book is about presenting. What’s cool about this section is that it isn’t just a variation on ‘relax and don’t say “um”’ but actionable tips. 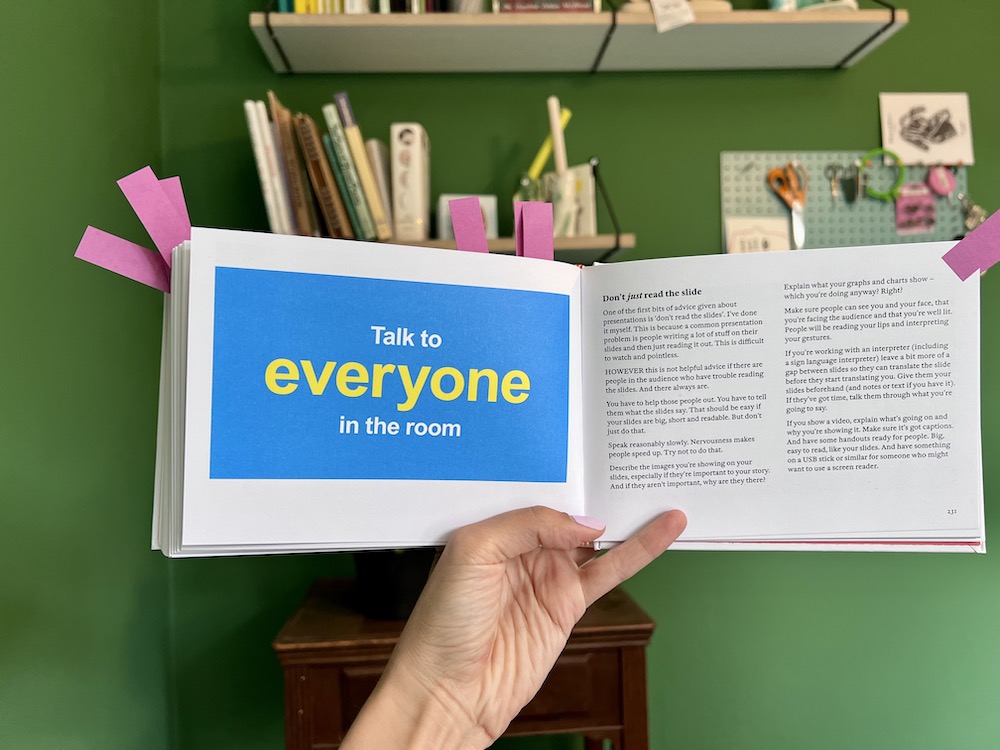 For example, he gives three ways to have a good ending: 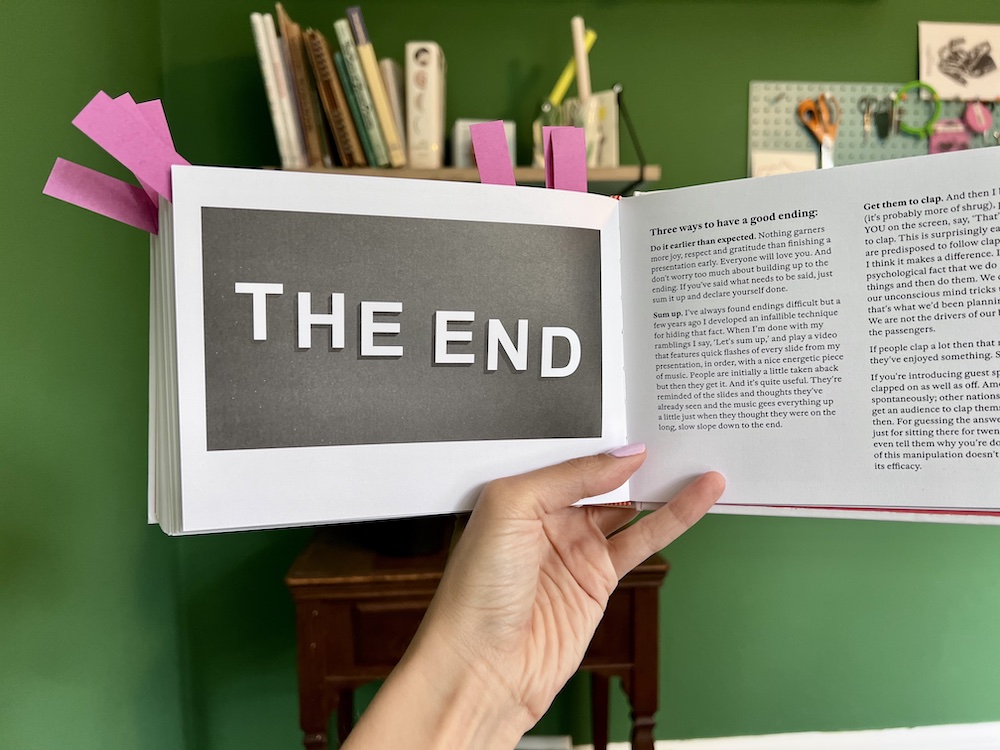